This short animation film was funded by the National Film Board of Canada (NFB) in partnership with the non-profit charitable organization Street Kids International (now part of Save the Children), founded by Order of Canada recipients Peter Dalglish (World Health Organization) and Frank O’Dea (Second Cup). It was written and directed by Academy Award winner Derek Lamb, a British transplant whose now ex-wife Janet Perlman helped animate the film. Karate Kids has be translated into more than 25 languages, circulated in over one hundred countries, and was the recipient of the Peter F. Drucker Award for Canadian Nonprofit Innovation in 1993. With such accolades for both the film and its makers, it’s (un)surprising that the film’s content and message was met with anger and hostility from AIDS activists in Canada—notably ACT UP/Montréal. 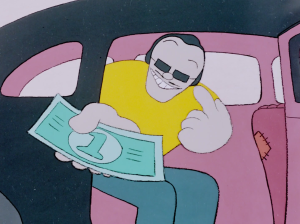 Karate Kids takes as its premise that there are dangerous men lurking around densely populated markets in the global south who are there to rape your little boys and infect them with AIDS (no, not HIV, but AIDS, because a complex understanding of the disease isn’t relevant here). While the film is utilizing methods of visual instruction for HIV prevention—there’s brief discussion of condoms in the context of “making love” with your opposite-gender partner—the film’s message is muddied by rampant homophobia. Stranger danger is typified in the film by images of a feminine man with a pencil moustache and sun glasses riding around in a dark car with a driver looking for children to entice with money and gifts (ie. rich faggots who want to fuck your children). It just so happens that this “smiling man” in the dark car ensnares a young boy Mario, rapes him, and at the end of the film Mario dies of AIDS. The lesson to be learned: stay away from rich faggots, even if they offer you money or gifts, because they only want to rape you and give you AIDS.

ACT UP/Montréal responded by producing a bilingual pamphlet condemning the film and outlining a number of problems.  ACT UP complains that the animation and the attendant comic book based on the same characters and storyline, peddle bigoted stereotypes and middle class morality. Furthermore they note the film trades action and violence—the “Smiling Man” is killed fleeing a lynch mob—while failing to show the realities of how HIV transmission occurs and is prevented in everyday contexts. You can find the full flyer in english and french in our digital Montréal ephemera archive here.

The film can be watched in full on the NFB website, as it continues to circulate today as an AIDS education video—believe it or not.  You can also check out the factually suspect (“AIDS virus”) study guide meant to be used by community educators to help supply the factual information missing from the short animation. And if you haven’t had enough already, you can continue watching the misadventures of Karate and his street kid friends in the follow up animation Goldtooth (1994) or watch the promotional video Brave Ideas (1993) celebrating the animation short and Street Kids International .