Toronto-based anarchist theatre collective Youth Against Monsterz produced at least two tapes in the late 1980s that are now available online thanks to the sleuthing of Andy Sorfleet.

Please Adjust Your Sex is a DIY no-budget videotape by and for young people that encourages viewers to engage in safer sex and safer drug use practices while also encouraging them to embrace their desires and reject the patronizing and moralizing media cacophony bombarding them everyday. While the aesthetics are dated, the editing choppy, and the acting goofy, this tape is an important predecessor to the now much more polished DIY youtube videos being made by young people today.

Another Man features many of the same thematics, but smartly wrapped up into a three minute music video featuring the synth sounds of the Mr. Tim Collective and the whip-smart analysis of lesbian activist Chris Bearchell. According to Vtape, Another Man was originally shown on City-TV’s syndicated New Music Show. Gay film scholar Tom Waugh also points out that Another Man was one of three videotapes from Canadian authors included in Canadian John Greyson’s and American Bill Horrigan’s 1990 three VHS compilation package Video Against AIDS (1990).  With hundreds of these three tape packages distributed in the US by Video Data Bank and in Canada by Vtape, Another Man reached significant audiences all over North America before online digital video distribution.

For more on Canadian video artists’ responses to the epidemic see Chapter 9, “Anti-Retroviral: A Test of Who We Are,” in Tom Waugh’s Romance of Transgression in Canada: Queering Sexualities, Nations, Cinemas (2006).

In the opening scene of this Montréal-based production, all the show’s actors stand shoulder to shoulder before the audience. In silence, the first person in the lineup lets a large drop of saliva slide out of their mouth only to be caught in the mouth of the person beside them. The act of sharing and mixing body fluids continues down the line until the final actor catches the last drop of spit and swallows. The gesture, in the context of a theatrical production about HIV/AIDS, needs no explanation. These actors are in it together for the following two hours of fluxus-style HIV/AIDS happenings.

The actors then re-present HIV/AIDS cultural production, activism, and history in a kaleidoscopic collage of scenes. A young woman, excited by the history of AIDS activism and ACT UP exasperatedly struggles to explain how the costume she has designed symbolically references many notable moments of activist resistance. A young man interprets Mathew McConaughey’s Dallas Buyers Club Oscar

acceptance speech from English to French, putting into relief the absurdity of Hollywood’s callous relationship to the history of HIV/AIDS. Two actors stand before us side by side telling the most callous and horrendous AIDS jokes from the ‘80s and ‘90s, again changing their meaning by changing the context of their presentation. Another actor invites the audience to cheer and wave pompom’s while delivering a diatribe against HIV criminalization and the lack of safe injection sites, all while the scene is being live streamed on Facebook.

The performance vignettes continue, re-presenting HIV/AIDS cultural production, activism, and history. At times the references may be hard to decipher for those not immersed in HIV/AIDS activism or history. Not everyone will know that that naked actor washing himself in grapefruit juice is making explicit reference to the harmful interaction grapefruit juice has on some HIV medications. Not everyone will get the John Giorno references in lyrics of the Montreal electro-hipster duet that precedes the play’s 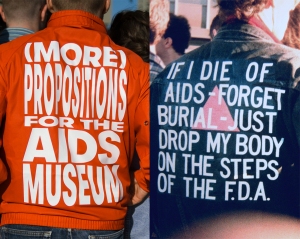 closing scene. Not everyone will get that the flyer advertising the show is a direct reference to a photo of artist/activist David Wojnarowicz wearing a jacket with text on the back. But knowing all the references isn’t necessary. If anything it entices viewers to ask, “What was that about?” or at least prompt a google query. For me personally, it simply made me want to re-watch the entire production from beginning to end to catch more of the layers I might have missed the first time around.

Two moments in the show stand out in their ability to put the past in dialogue with the present. The first is simply a scene where all the actors slowly carry placards from upstage to downstage, looking directly into 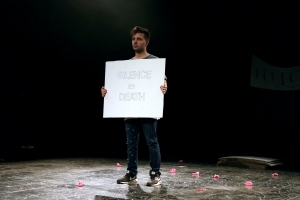 the faces of the audience. Some signs carry now well-worn HIV/AIDS slogans like “SILENCE = DEATH” or “ACTION = LIFE”, while others carry new slogans and phrases like “FREE STEVE,” referencing a Quebec City man imprisoned for HIV non-disclosure, and “SILENCE = SEX” referencing the stigma still faced by HIV-positive people who disclose their status in the bedroom. The other interesting present-historical moment comes when well-known Montréal drag queen Peaches LePage, also known locally as activist and performance artist Jordan Arsenault, invites a special guest from the audience to the stage for a Barbara Walters meets Joan Rivers sit-down interview. Special guests included Doctor Jean-Pierre Routy, publicist and playwright Puelo Deir, filmmaker Anne Golden, and performance artist Atif “Trannietronic” Siddiqi. The only addition I longed for in this moment of Montreal historiography was the acknowledgement and presence of the larger Montreal Haitian community that bore the brunt of the epidemic in its early days in that city. This was a missed opportunity and is a trajectory worth pursuing for another (EVEN MORE) PROPOSITIONS FOR THE AIDS MUSEUM in the future.

Following the on-stage interviews, the show crescendos into a Robert Wilson-esque final scene where each actor’s vignettes overlap on stage. A ballet dancer slowly sheds his coat of carnations in an endurance performance on his tippy toes, a young woman now nude and covered in self-applied Kaposi Sarcoma legions stares into the crowd, a young man covered in honey lying in a pile of popcorn slowly emerges to walk across the stage at a glacial pace. And much more.  The final scene is messy and complex and difficult to take in. A fitting end to a show that aims to present historical impressions of a messy and urgent period of crisis that continues in different forms today. While the show’s structure, historical references, and at times uncomfortable re-presentations of history might be difficult for some viewers, I think that might precisely be the point.

To learn more about the show check out project hybris.