Members of the AIDS Activist History Project are saddened to hear of the passing of Glen Brown, a remarkable and important figure in the history of AIDS-oriented activism in Canada. We are very grateful to have had the opportunity to interview Glen in 2014 about his experiences with AIDS activism in Toronto during the 1980s and 1990s. What follows is a glimpse into the many memories that Glen shared with us during his interview.

When Glen moved to Toronto in 1988, he described feeling as though he’d arrived at the “epicenter” of the AIDS epidemic in Canada. He recalls spotting posters around the city; images of that “giant Thor-like character” emblazoned with the words “TOO DAMN SLOW” and “IT’S TIME TO ACT.” That poster – which Glen held onto for de 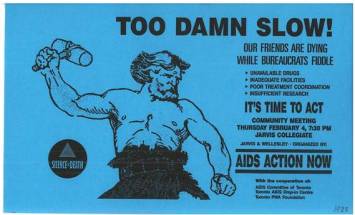 cades – helped to draw him into the activist scene in Toronto. “I’m not going to do nothing,” he thought to himself. In our interview with Glen, he described that first meeting at Jarvis Collegiate. It was there that he first met many of the activists he’d been reading about in The Body Politic, including Tim McCaskell, Gary Kinsman, George Smith and Michael Lynch. It was a “powerful meeting,” he recalled, and “a nice welcoming place for a sort of lefty queer to arrive.” When the meeting broke up into working groups, Glen found himself joining the Public Action Committee, an arm of AIDS ACTION NOW! that was centered in organizing direct actions and demonstrations.

There were so many demonstrations that stood out in Glen’s memories: carrying mock coffins past the Toronto General Hospital; burning Jake Epp in effigy outside City Hall; the AIDS ACTION NOW! float and die-in during Toronto Pride; hanging effigies “out to dry” in front of Queens Park; and liaising with ACT UP New York and Réaction SIDA for the V International AIDS conference in Montreal. He reminded us of how powerful these demonstrations were, how committed and relentless the activism was at this time, and how he and others felt as though they were actually making a difference in the world.

Another particularly significant memory Glen shared with us was the key role that AIDS activists played in establishing what is now known as the Trillium Drug Plan. Glen’s work was central to this effort. By 1990, access to drug treatment had become the “chief issue facing people with HIV,” since many were unable to afford the exorbitant costs of life saving drug treatments. The resulting drug plan, Glen reminded us, was made possible by the activists who relentlessly demanded change and consistently called upon politicians to do better by people living with HIV/AIDS.

Near the end of our interview with Glen, he described his work around AIDS activism as “the most transformative part” of his life. We look forward to learning more about this work from the many stories, images and documents that Glen shared with us. We invite others to learn from these materials, which we’ve made publicly available here on our website.

Click here to read through the full transcript from our two-part interview with Glen, and to learn more about his important contributions to AIDS activism.