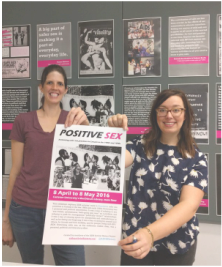 On April 8, in honour of Youth and AIDS Day, the AIDS Activist History Project (AAHP) launched its first exhibition, titled “POSITIVE SEX: Eroticizing Safer Sex Practices in Canada in the 1980s and 1990s.”

“We need to say no, we’re finding safer ways and continuing to play.” – Tannis Atkinson, “Wet, wild and well” publication

While “POSITIVE SEX” recalls many of the personal and political interventions made by AIDS activists, this only the beginning of a series of exhibitions to be produced by the AIDS Activist History Project. The memories and experiences that this exhibition brings into view are part of a broader history of government inaction and resistance against the stigmatization and criminalization of people living with HIV/AIDS in “Canada.” Much of our work with this project is to continue uncovering stories of resistance and direct action, and to continue to make these histories available to the public.

“POSITIVE SEX” will be on display at the MacOdrum Library until May 8, 2016.  The exhibition will then move on to Mike’s Place, Carleton’s grad student bar.

To view the full exhibition online, click here or visit the “Exhibitions” tab above.

Connect with us on Twitter (@AIDSHistory) using the hashtags #eroticize and #PositiveSex. What does eroticize mean to you? Join in the discussion!

Sarah Rodimon (@sarahrodimon) is a PhD Candidate in the Department of Sociology and Anthropology, and the Institute of Political Economy at Carleton University (Ottawa, ON)